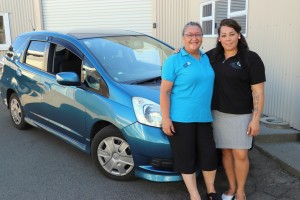 “I don’t want to die gasping for breath”. At a pack a day, Linda was spending $167 each week on cigarettes.

But after joining the Tame Your Taniwha Stop Smoking Challenge late last year to kick-start her stop smoking mission she’s taken just over half that money each week and bought herself a new car to enjoy.“It’s a smoke free car,” she says smiling, “I’m feeling so much better AND I have coin left over.”

Linda Te Nahu has kicked the habit, thanks to support from Stop Smoking Practitioner Kylee Stok. She’s now spending about half of what she used to spend on cigarettes and paying off a lovely new car instead.

Linda first took up smoking in her teens and had tried to quit numerous times in the past. This time though, she’s convinced she’s finally kicked the habit. “It just feels  different.” Coached by Te Kupenga Hauora - Ahuriri’s Stop Smoking Practitioner Kylee Stok, Linda found the thought of letting her Tame Your Taniwha teammates down  a real motivation and worked with Kylee to find the best type of nicotine replacement therapy to help her ease cravings. She also set a goal of achieving a zero CO reading which she tracked through weekly measurements. “Linda was really determined. She made changes to her everyday routine and identified her triggers,” says Kylee. Linda agrees, “small changes and small steps make the difference.” The end of the year was particularly stressful and having a lozenge or avoiding smoking environments helped her to stay on track and resist the urge to have a cigarette.

Linda is enjoying the financial freedom as well as the health benefits. She’s busy planting the seed in others with her husband cutting down his smoking and being a good example for her children and mokos. Physically she’s noticed improvement in her skin as it became more oxygenated and less anxiety, as she’s not always counting down to her next smoke. This year, with Kylee’s help, she’s looking forward to getting more active and focussing on fitness. “You have to want to do it,” says Linda but having Kylee’s support and all her colleagues at Te Kupenga Hauora – Ahuriri backing her has really helped make it easier.

You can self refer for stop smoking support. Search for TKHA Smokefree on Facebook and send them a message. They can even come to you. They currently have 4- week challenges where you can earn Pak ‘n’ Save vouchers for completing. Or you can call for help - 06 835 1840 and ask for our Stop Smoking Service.